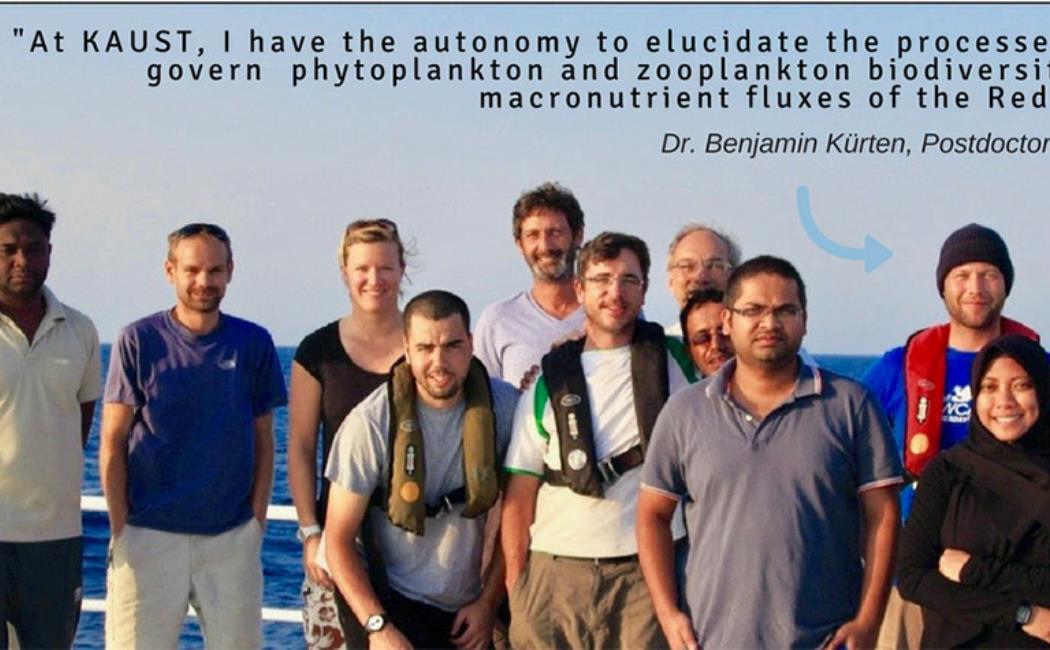 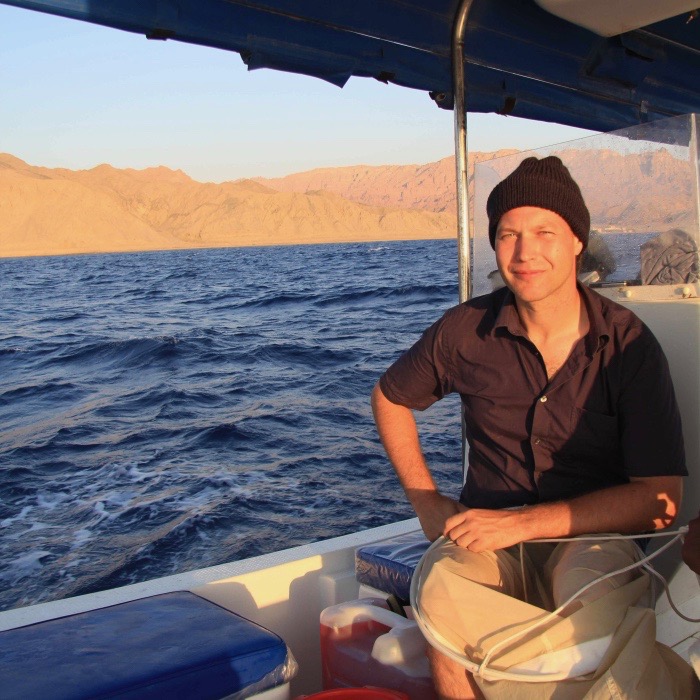 Dr. Benjamin Kürten is a Postdoctoral Fellow in the Red Sea Research Center at KAUST. With over seven years of research experience of the Red Sea, he is emerging as a leading voice in biogeochemical cycles, food webs and ecohydrographic patterns in the region. We asked Ben to share with us some of his research interests and what inspired his passion for marine science. Here’s what he has to tell us.

What are your research interests? 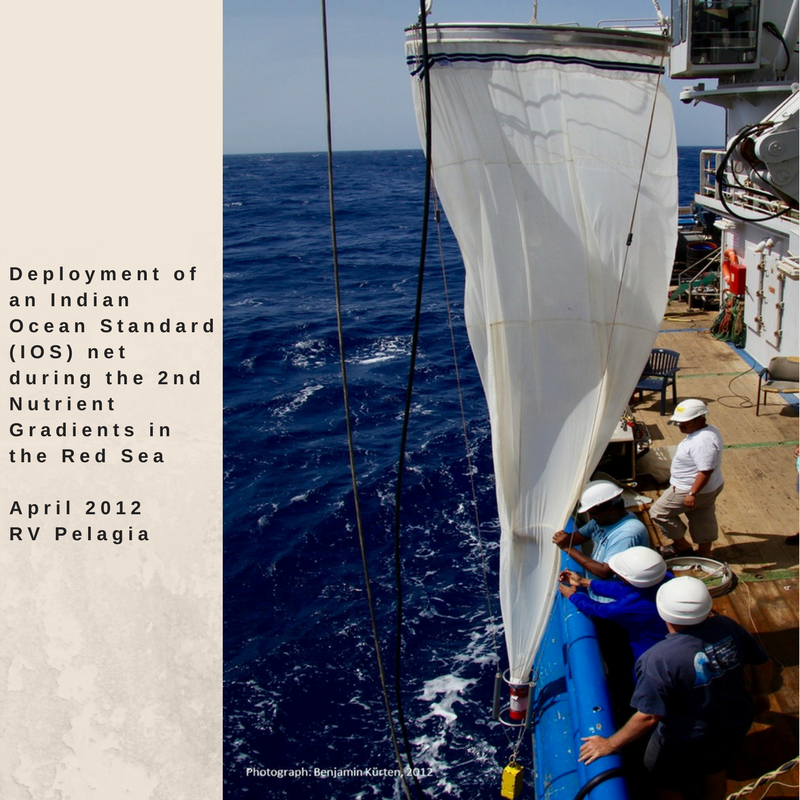 As a biological-oceanographer, my research is driven by my interest in ecohydrographic patterns. That is, I am characterizing the influence of oceanographic processes on the biogeochemistry of the Red Sea, and the concomitant carbon and nitrogen fluxes through food webs (trophodynamics). Altogether, these processes modulate the composition and architecture of aquatic food webs, and translate into geographic patterns of stable isotope distributions, known as isoscapes.
Since 2010 I have been studying the biogeochemistry of the Red Sea, particularly pelagic and coral reef food webs. In my first postdoctoral research project Nutrient Gradients in the Red Sea (2010-2013) within the Jeddah Transect project, I studied how latitudinal nutrient gradients in the Red Sea correlate with plankton abundance, biodiversity and food web structure in the Red Sea and its coral reefs.

What specific research are you doing at KAUST? 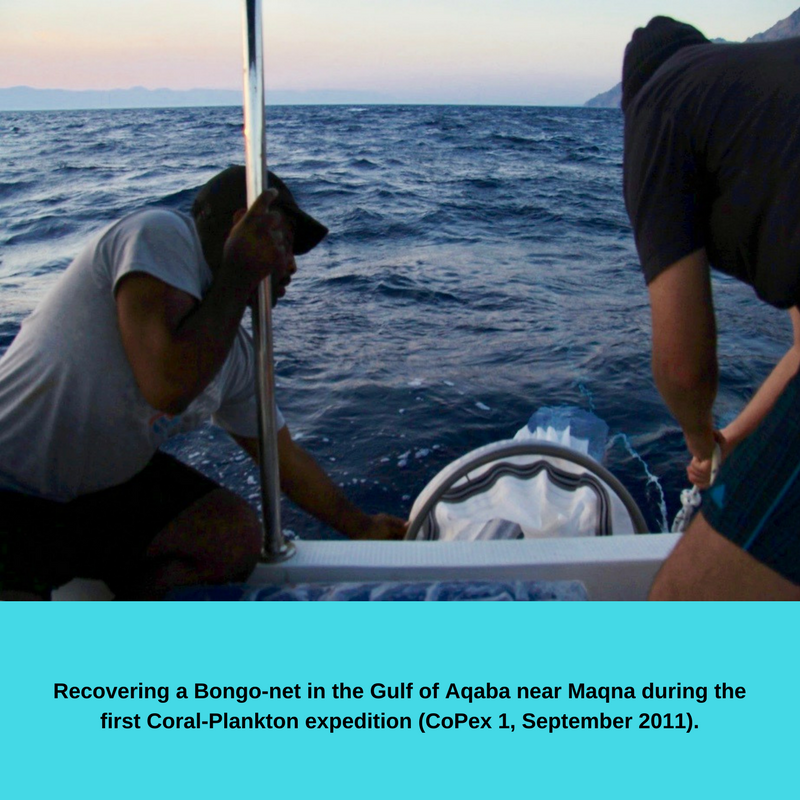 in the Integrated Ocean Processes group of Prof. Burton H. Jones. I am working on the oceRecovering a Bongo canva. pnganographic modulation of macronutrient fluxes, the inflow of water masses from the Indian Ocean through the Gulf of Aden, and land-based sources of urban pollution to elucidate the ecology and biodiversity of coral reef biota and plankton and their responses to climate change. To understand the dynamics of autotrophic primary production and nitrogen fixation we complement isotope tracer assays with a suite of biological-oceanographic observations. To characterize the underpinning nitrogen sources for and the fate of primary producers in the marine environment, one focus is on the nitrogen and oxygen isotope distributions in nitrate and seawater of different water masses, the carbon and nitrogen isotopic composition of molecular compounds (e.g. of amino acids), and concentrations of nitrous oxide (N2O).

Why does this research matter to you?

Why did you choose KAUST for this stage of your research career?

I chose to join Prof. Burton Jones group, because I was offered the autonomy of evolving and expanding my focus on oceanographic drivers such as mesoscale processes and upwelling in the Red Sea, while working collaboratively in a multidisciplinary academic setting with oceanographers, atmospheric modelers, remote sensing analysts, and reef ecologists. Through KAUST I have the incredible opportunity to elucidate processes that govern the phytoplankton and zooplankton biodiversity and macronutrients fluxes of the Red Sea.

For more on Ben’s background and publications, visit:

Existing Postdoctoral Fellowship opportunities will always be advertised on our news and events page:

Participants of the second Coral-Plankton expedition (CoPex 2, May 2015, Al Lith)